VFS Global, an online visa application service used by the Home Office, has received backlash recently over the consistent issues it is causing for applicants.

The service appeals to many people who want to make a visa or settlement application themselves without the help of a lawyer. The company promises “seamless” online visa and passport applications, and touts its ability to be quicker and faster than traditional forms of visa application methods.

However, VFS Global’s UK application service is being heavily criticised by both applicants and legal professionals.

The decision-making system is extremely punitive of small errors and resolving issues can take months. It is a source of disruption to business and anguish for families.

VFS Global’s review score is shocking, with 73% of applicants giving it a 1/5 and many individually specifying that they would have given a 0/5 if this were a possibility.

The major concern surrounding VFS’ service is that applicants are making complaints about the same issues, which seem to be happening again and again. VFS do not appear to be doing anything to resolve these issues, with various applicants saying that they have not heard from them in over a month since they made their complaint.

The Visa4UK website asks applicants several questions when helping them make their applications. As Colin Yeo points out, these questions are “poorly phrased” and “irrelevant” and confuse many people who don’t have a background in immigration law.

Lots of them ask questions which assume the applicant has some sort of legal knowledge. As the vast majority of visa applicants don’t, this has caused many issues. For example, many applicants are getting confused by these questions and providing false answers without realising. The Home Office them punish this as a “deceptive answer” and their application is refused, without a refund or chance of appeal.

The majority of low score reviews for VFS complain about the lack of support and communication they have received while making their application. Many have also complained that, after facing issues, the “customer support team” have been unresponsive. Even despite calls and emails, no one can offer the support and resolution these applicants need. This then leads to the applicant missing their deadline, or having their application refused due to insufficient evidence or misinformation.

VFS charges for phone calls and often keeps people on hold for long periods of time. When people do get through to someone, many say that the help is completely useless. One user who called up took to Twitter to complain about how the person she had spoken with could not give her any information or support because she was looking at the same page as her: 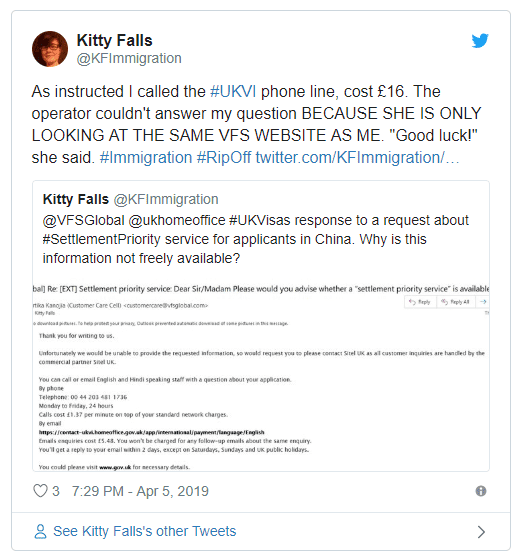 VFS’ portal has been criticised for giving the wrong advice to applicants, especially on which documents to submit with an application.

The documents needed for each category of visa or settlement application is incredibly important. If an applicant fails to submit enough evidence, they lose their case. In some cases, such as with Spouse Visa applications, an applicant can also submit too much evidence. Home Office officials then perceive this as overcompensation and reject their applications as a fraudulent marriage.

One case, which is discussed by Colin Yeo, saw the portal give incorrect advice for a child dependent for a Tier 2 Work Visa application. The portal failed to list a birth certificate under the “mandatory documents” heading, despite this being an essential document for the application.

In some cases, such as with Spouse Visa applications, an applicant can also submit too much evidence. Home Office officials then perceive this as overcompensation and reject their applications as a fraudulent marriage.

Another case saw a dependent partner of a Tier 2 Work Visa applicant miss out on submitting proof of cohabitation (living together in their home country). This as after the portal told her that it wasn’t essential evidence, when it is.

Inappropriate use of premium services

Many negative reviews for VFS Global have also mentioned that they were advised by the portal to upgrade to premium. This is despite them either not being eligible, or not needed to use them. Many applicants have complained that they were also not able to book in a submission date or appointment unless they used the premium services.

VFS’ site lets applicants upload their documents straight onto it. However, the uploading system has been fraught with technical issues. The system has crashed on various applicants, who have then lost their application or had to backtrack and start it again from scratch. This has caused upset from many users since the process can take several hours to complete.

If a person chooses, they can pay a fee to VFS, and have them scan the documents for them. However, this has also caused issues. Staff members have incorrectly scanned documents across to the Home Office or missed documents completely. This has led to many applicants applications being refused due to insufficient evidence, resulting in a loss of money and time.

Applicants have also experienced many problems with having their biometric details taking properly. This is more of a problem on Sopra Steria, which is VFS equivalent for those making in-country visa and settlement applications.

There have been several reports of Sopra Steria incorrectly capturing applicant’s biometric details, which means they need to attend a second appointment and delay their application further.

Most negative reviews and complains have been due to severe delays. Many applicants have had to wait weeks and even months after paying for the 24-hour premium service.

There are also delays of up to six months reported by reviewers. Some have asked for refunds and still not been issued them at this time.

This was due to accounts being very easily accessible to identity thieves, who were able to log in and steal applicant’s birth certificates, passport documents and bank details.

There is a growing concern that online visa application systems do not securely hold the supporting documents and information for their applicants. They do not seem to have changed their systems since the identity thefts and data breaches have taken place. This is a real worry for those in the immigration law sector.

The new online system for entry clearance applications and extension applications might appear attractive for an applicant or sponsor to use, but that can be a false impression with many people not really being aware of what is involved in making an application.

I have found the document check-lists that are auto-generated with the online system to often contain documents that are not required or to miss out many documents that are actually required – it is things like this that can cause an application to be refused. Documents must be scanned and uploaded and this can be a tricky process if you don’t have access to a good scanner, are not computer literate and not comfortable ensuring that the documents are uploaded properly and within the file size limits – it can be an extremely time-consuming and fraught experience ensuring everything is uploaded properly.

For entry clearance applications there are real problems in figuring out where supporting documents are to be submitted – whether at the visa section, the decision-making centre, a VFS office or to be scanned and uploaded.

The procedure differs country by country and this issue can cause many headaches. In-country, the problem is booking an appointment for biometrics with SopraSteria due to poor availability of appointments. Overall, unless you have the time, experience, perseverance and IT confidence, I would strongly advise anyone considering making a visa application to contact us to handle what can be a very expensive and emotionally demanding process.

If you’re having difficulties using the online application system and would like advice on applying for a visa extension or settlement, we would like to offer you a free 15-minute consultation.

We have offices across the UK in areas such as London, Birmingham and Manchester. If you can’t make it to one of our offices, our lawyers can also conduct a consultation over the phone or via Skype call.

Get in touch today to book your appointment.