A former English teacher has been refused British citizenship because he was absent from the UK for 25 years- even though this period of absence was caused by the wrongful confiscation of his passport.

Ken Morgan, 70, has described the decision as a ‘ridiculous catch-22’, and highlighted that the sole reason for the refusal was a period of absence that was in no way his choice.

Morgan arrived in the UK as a ten-year-old in 1960 after travelling from Jamaica on a British passport. He attended school in London, and lived and worked in the UK for almost 30 years. In 1994, he returned to Jamaica to attend a relative’s funeral, but when attempting to fly back to London, was stopped at check-in and had his passport confiscated.

Despite describing his situation to British High Commission officials, they were unconvinced that any wrongdoing had taken place, and did not act to rectify the situation. As a result, Morgan remained in Jamaica until 2018, when, in the wake of the Windrush scandal, he was contacted by British diplomats and offered a temporary visa that allowed him to return to the UK.

During his first visit in 2018, he submitted an application for British citizenship in the hope of securing his long-term future in the country. But following a processing delay of around two years, Morgan received confirmation that his application had been rejected, with the Home Office citing not only that he had been absent from the UK on a date five years prior to the application, but also that he spent more than 450 days outside the UK during the qualifying period- both of which were caused by the wrongful confiscation of his passport.

“I am sorry to tell you that you do not meet the requirements for citizenship and you do not have an entitlement to the right of abode in the United Kingdom.”

Morgan was deeply shocked by the decision, and phoned the Home Office from Jamaica to say:

“How can you prevent someone from returning, then turn their application down and tell them you were not in the country and therefore are not eligible? Hello? Hello? Why was I not in the country? It makes no sense.”

His experiences have made him see the Home Office’s comments about righting the wrongs of the Windrush Scandal in a completely different light:

“The promised change of culture hasn’t happened. When we take the limelight away from the Home Office, they revert back to their old ways.”

Following the confiscation of his passport, Morgan endured a period of destitution which saw him living on the streets of Kingston. He then retrained as a graphic designer and started his own business, before later taking up employment at the University of West Indies. Despite surviving the injustice he encountered and building a successful career, he still urgently requires a solution to his ongoing citizenship issues.

Morgan’s legal team has asserted that the Home Office had the right to exercise discretion due to his exceptional circumstances:

“There is no recognition that the sole reason for Mr Morgan being unable to meet the requirements set, was due to the unlawful act of the British official in the high commission in Jamaica, confiscating his valid British passport.

It is deeply disturbing that a taskforce precisely set up to right the wrongs done to Windrushers could make such a fundamental error. Neither Ken nor his lawyers can now have any confidence in statements by a succession of home secretaries that they are committed to providing justice for those who have been so severely injured by decades of hostile policies implemented by the Home Office.”

A Home Office spokesperson has said:

“An independent review, which was requested last month into Mr Morgan’s case, is ongoing. All citizenship applications are considered on their own merits in line with the requirements set out in nationality legislation.”

If you’re concerned about your British citizenship application, contact our client care team today on 0333 305 9375 for immediate assistance.

We are highly experienced in all areas of immigration law, from Spouse Visa applications to Indefinite Leave to Remain (ILR) applications, and would be delighted to assist with your query. 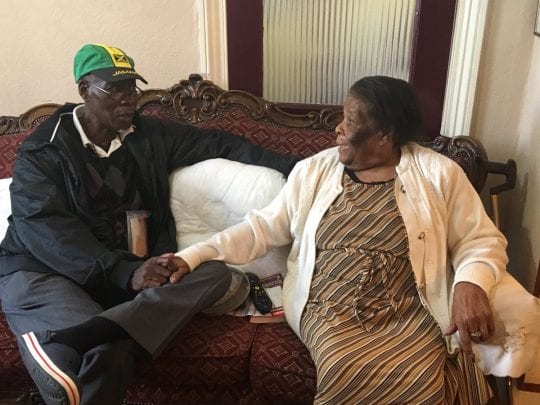 Ken Morgan, left, was able to return to the UK in 2018 after he was offered a temporary visa by British diplomats.  [Image: Twitter]

Morgan is one of the many people whose lives were irreversibly altered due to the injustice of the Windrush Scandal. [Image: Discover Society]