A joint investigation between the Observer and ITV News has revealed significant failings when it comes to the housing of asylum seekers within government approved hotels. Now, the Labour party has called for an investigation to find out whether the hotels are fit for purpose.

The investigation revealed several issues, firstly a number of women have alleged that they have been sexually exploited whilst being housed in government contracted hotels and that they have felt unsafe. The investigation also revealed allegations of intimidation by private contractor staff who have unlawfully threatened to call the police if they leave their hotel.

Maddie Harris from the Humans for Rights Network, said they had recently heard claims from a reliable source that women were being abused in a London hotel. She said:

“We have received allegations that young women are being exploited. This is deeply concerning as these vulnerable women must be protected from harm. The Home Office must immediately investigate these allegations and ensure that asylum seekers whom they have a statutory responsibility to protect are safeguarded from harm.”

As well as the poor treatment of asylum seekers, the investigation has found that staff at some of the hotels have been paid under the minimum wage. Stay Belvedere Hotels Ltd (SBHL) is responsible for providing temporary accommodation for asylum seekers in around 50 hotels located in London and the South of England. Some of their staff claimed to have worked 12-hour shifts, 6 days a week for just £5.77 an hour. When one employee complained about the pay, a WhatsApp message from the SBHL manager stated: “I have plenty of ppl willing to work at even less than what u are getting paid, trust me.”

The worrying findings come after it was revealed that 29 asylum seekers died in Home Office accommodation last year, bringing into question the Home Office’s responsibility to protect asylum seekers.

The Immigration Advice Service provides expert immigration legal advice and application assistance, including for asylum seekers, those looking to work in the UK and for Indefinite Leave to Remain applications.

We have offices located across the UK, including in London, Manchester, or Birmingham. You can also use the office finder to find the closest branch to you. To find out more about our comprehensive range of services, please call us now on 0333 305 9375. 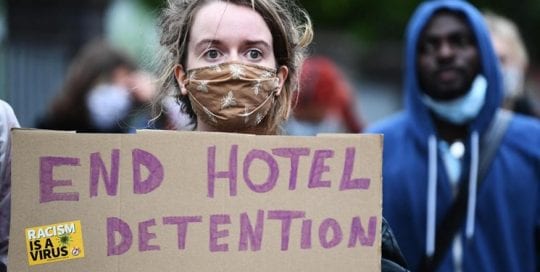 The Home Office has come under criticism over their housing of asylum seekers (Image credit: The Guardian