Migrants are waiting 37 weeks for access to healthcare in England

A new report by Doctors of the World has revealed the substantial amount of time that migrants in the UK are being denied medical treatments for. Their research showed that migrants, asylum seekers and refugees waited an average of 37 weeks for treatment.

The report, titled “Delays & Destitution: An Audit of Doctors of the World’s Hospital Access Project”, comes shortly after the announcement that the Immigration Health Surcharge is set to increase from £400 a year to £624 from the 27th October, an increase that has been heavily criticised as being unaffordable for many migrants in the UK.

The report claimed that the governments hostile environment policies were to blame for the long waiting times, with immigration checks in hospitals being just one of the reasons for delays in access to treatment. It also investigated the effect that NHS charges had on access to healthcare for migrants, many of whom were facing destitution.

“The report lays bare the true impact of the NHS patient charging policy on patients. Put simply, those who cannot afford to pay have to go without treatment, however desperately they need it.”

A shocking 22% of service users were charged wrongfully for urgent medical treatment, which official NHS guidance states their should be an exemption applied to. Being unable to afford treatment was another reason that migrants faced long delays, despite facing illnesses as serious as cancer, heart problems and kidney failure.

Anne Miller explained that the report proved that current policies in place to prevent situations like this were failing, she said:

“It shows that all the safeguards put in place to ensure urgent medical care is provided regardless of a person’s ability to pay aren’t working, and patients suffer for months, sometimes years, on end, alone.”

What should the waiting times be?

NHS guidelines state that 18 weeks should be the maximum amount of time that people have to wait for treatment from the NHS. Before the coronavirus pandemic, 80% of people in England were being treated within this time.

This contrasts greatly to what the migrants studied in the report were facing, with one service user waiting over 4 years for treatment.

Get help with your immigration issue

If you are facing an immigration issue, our lawyers are here to help. They can assist with visa applications, asylum claims and much more. They can also offer their expert legal advice regarding any difficult immigration situation you may be facing.

Simply call us today on 0333 305 9375 to speak with one of our immigration lawyers or to book an appointment at one of our offices, located in London as well as other areas throughout the UK. 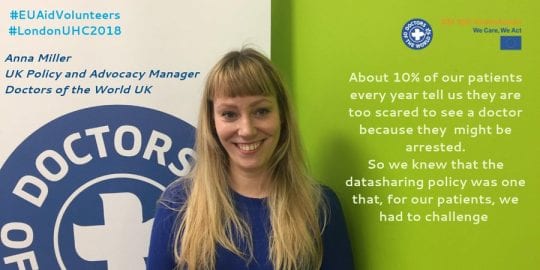 Anna Miller – Author of the Report  [Image credit: Doctors of the World]