There have been multiple concerning headlines in recent weeks on the topic of Napier Barracks and the conditions in which asylum seekers are expected to live.

The Home Office agreed with the Ministry of Defence that it would use Napier Barracks to house asylum seekers in September 2020 for at least 12 months as a result of the shortage of available accommodation options.

It was suggested that there have been fewer deportations or removals as a result of travel restrictions during the COVID-19 pandemic, as well as a backlog in asylum case decisions, resulting in an increase in demand for temporary housing.

Despite being designated for short-term use only, the Home Office has stated that Napier Barracks had previously accommodated army personnel and is “safe, warm, secure with three nutritious meals served a day.”

However, there have been multiple reports from asylum-seeking residents about the unsuitability of the location for temporary accommodation.

The most recent news story concerning Napier Barracks is a case taken by six asylum seekers to the High Court. They claim that the Home Secretary acted unlawfully by directing asylum seekers to unsuitable accommodation.

The argument presented to the Court was that the accommodation was in contravention of the Human Rights Act and that they were unlawfully detained.

Evidence was presented to the Court showing that there were seven suicide attempts recorded at the location, as well as seven incidents of serious self-harm. Further, many of the residents have stated that they were victims of human trafficking and/ or torture.

A recent government report examining conditions in both the Napier Barracks site and in the Penally Camp situated in Wales found evidence that both sites were “impoverished, run-down and unsuitable for long-term accommodation.”

The report was issued by the Independent Chief Inspector of Borders and Immigration (ICIBI) and Her Majesty’s Inspectorate of Prisons (HMIP) following a two-day inspection at both sites.

Some of the key findings included the following:

Penally Barracks was to be handed back to the Ministry of Defence and residents transferred by the end of March 2021. Meanwhile, the Home Office has stated its intention to continue using Napier Barracks for the purposes of asylum seeker accommodation until at least September 2021.

People who come to the UK as asylum seekers have international legal protections allowing them to enter the country and make a case for further protection. In most cases, there is no legal reason to detain asylum seekers whose cases are being processed by the Home Office.

The criteria that an asylum seeker must meet in order to be eligible for social or welfare support is to be “at risk of destitution.” If the person is unable to access adequate accommodation, the applicant may apply to UK Visas and Immigration (UKVI) for further support.

Official Home Office guidelines state that people should not be kept in initial accommodation for longer than three to four weeks. However, since the pandemic, there has been a major increase in the use of temporary forms of accommodation.

Support for asylum seekers coming to the UK

People who come to the UK as asylum seekers seeking humanitarian protection have often faced significant hardships and challenges.

The government support for ‘destitute’ asylum seekers while awaiting the outcome of a claim includes:

If an individual’s asylum claim is refused, the individual must return to their country of origin. It may be the case that they will be placed in immigration detention.

Some refused cases will include the right of appeal so that an applicant may challenge the decision to seek protection in the UK.

In the year ending June 2020, almost 17,000 people received grants of protection from the UK in the form of asylum, humanitarian, or other forms of leave.

In the year ending June 2020, there were almost 32,500 applications for asylum made in the UK – a figure roughly similar to the same period the year before.

These included over 11,000 grants of asylum, more than 1,300 humanitarian protection grants, and over 3,500 grants of protection through resettlement schemes.

The nationalities with the highest rates of asylum applications in the year ending June 2020 were Iran, Albania, Iraq, Eritrea, Pakistan and Afghanistan.

Future of asylum seeker system in the UK

It is unclear how the asylum system may change in the future. Proposals from the Home Secretary suggest that ‘reception centres’ could be used to provide basic accommodation and house asylum seekers throughout the duration of a pending asylum claim.

Josie Naughton, the CEO of the refugee charity Choose Love, has stated:

“I think it feels very worrying to have [refugee] camps on British soil… [The barracks are a sign of] where this government is going; this shouldn’t become the new normal.”

While the outbreak of coronavirus infections in January 2021 meant that all camp residents were removed to other locations, charities have expressed concerns that individuals have already been moved back to Napier Barracks, and that the intention is to continue to refill it.

If you are in urgent need of immigration support, or you have been detained and need immediate assistance, contact the Immigration Advice Service on 0333 305 9375.

We are experts in all areas of immigration law, including asylum applications, judicial reviews and administrative reviews. Our friendly and professional advisers are ready to assist with your case. 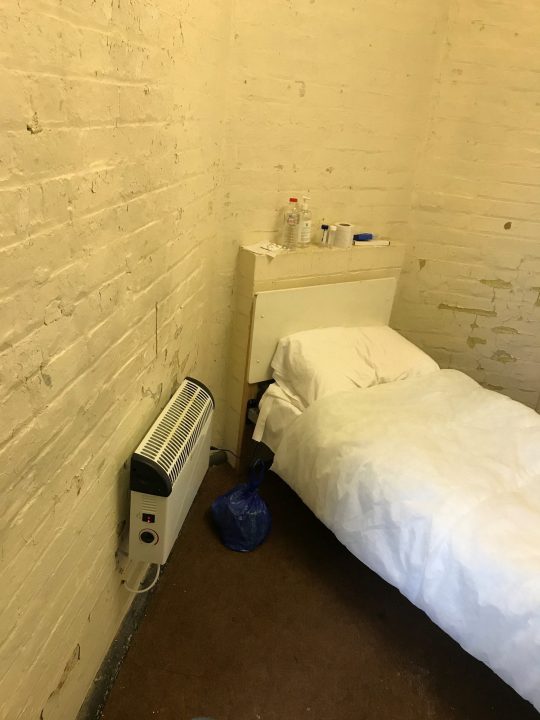 Residents of Napier Barracks deemed at high risk of self-harm are placed in ‘isolation rooms’ similar to the one above. [Photo: ICIBI and HMIP] 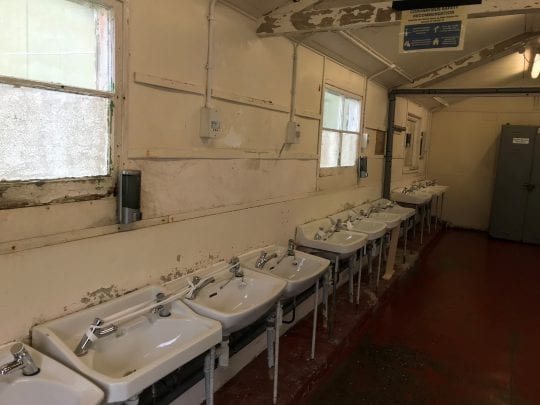 Some of the areas in Napier Barracks and Penally Camp were described as “filthy.” Above is a washroom at Penally Camp. [Photo: ICIBI and HMIP]